Boaters……..Cape Coral ranked #5 in U.S. for our Waterways

I read an article recently that was prepared by “SmartAsset” out of New York that ranks the best locations in America for certain topic’s. They seem to have found Cape Coral as one of the top 10 for boaters. Do you want to know why…..read more.

Out of the TOP 10 places in the U.S. for recreational boating, five were identified as being in the southeastern part of the country. Cape Coral ranked 5th as the best recreational destination for boaters. The ranking criteria was based on annual weather, cost of boats in the area, convenience of usage, and total water area for boating.

As an avid boater, with more than 25 years on the water, I certainly enjoy the diversity of boating destinations. With our barrier islands and 2 of the world class beach’s of Sanibel and Captiva at our door step, some of the best boating and shelling in the world are here. The barrier islands also offer great wind protection when out in a smaller vessel. In addition, our waters are the Tarpon trophy fish capital of the world. People from  all over the world travel to Gasparilla Island and Boca Grande pass in search of this fighting game fish. 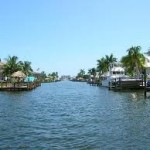 Another reason Cape Coral was ranked so high up the ladder as a boaters paradise, are the 450 miles of both saltwater and freshwater canals and lakes within the city. Most of the canal systems range in width from 80 to 120 feet wide…..all are “no wake” zones. The ability to have your boat docked in your own back yard in the canal is a big plus for low cost dockage and ease of usage. Boat lifts are abundant here as well. Cape Coral has long been called a boaters paradise.

The other 4 cities in Florida that were mentioned were St. Petersburg #2. Tampa $4. Jackonsville $6, and Miami #7.

As more people find our area as a destination for their relocation, so will the portion that are boaters will increase. It is estimated based on registrations that our county has 51,000 boats. That places our Lee county as the 4th highest number of boats in the state. 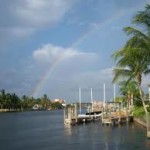 It’s all good news for the city as it continues to draw residences serious about their boating.